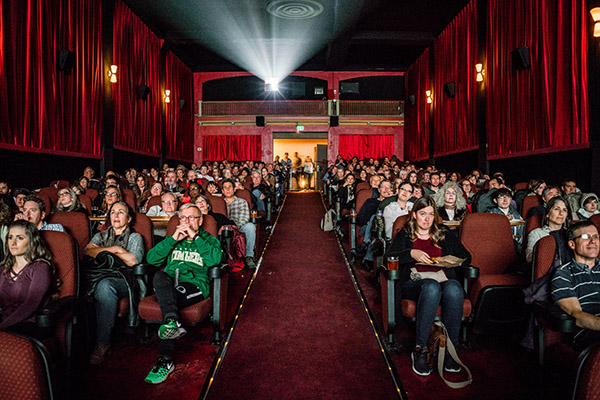 Film festivals are great opportunities for new and established filmmakers to showcase their projects, garner attention, possibly receive jury and audience awards, forge life-long connections, hone media training skills, and more. Our film festival is known as one of the most creative—a tastemaker for independent voices followed by many other programmers and media companies worldwide.

The Portland Film Festival has established itself as Portland’s leading film non-profit, with hundreds of screenings, events, education programs, and community partnerships providing a unique platform for our young and diverse audience to connect with filmmakers working in various genres and forms.

Thanks to our five-year partnership with Comcast NBC/Universal, festival promotion and our event receives national access to an over 30+ million subscriber base using proprietary, cutting-edge technology. As a result, Portland is one of the most creative and unique stepping stones for independent filmmakers globally.

We coined the phrase, “Support independent voices,” because we believe in supporting our filmmakers today and throughout their careers.

We host dozens of film and television professionals, offering filmmakers a chance to build new relationships across the industry. In 2021, for example, workshops included distribution and contract law from the world’s largest company, many of the talent and voices from The Simpsons, discussions on development funds for films, diverse women directors, and opportunities and case studies of filmmakers with disabilities and veterans. In addition, each year is filled with new and exciting cultures from the industry, raising independent voices from around the world.

Portland Film Festival features a rich program of films in the Fiction, Non-Fiction, World Cinema, Transmedia, Music, Short, Indigenous, Voices of Ability (Filmmakers with and stories about people with disabilities), Veterans and Student Filmmaking categories and a program dedicated to the work of filmmakers from Portland.

The Portland Festival offers new and established artists to present their films in a world-class screening environment, with curated competitions, Audience Awards, and opportunities to reach attending members of the national press.

Our programming team selected one hundred percent of our films last year from blind submissions. Every filmmaker that submits a film has an equal opportunity to be selected.

Hosted in one centralized location in Portland, its public transportation and accessibility are matched by very few cities. Portland offers a peaceful community and quirky environment with sophisticated audiences deeply engaged in the art of film. Submit your film today and join us for the annual Portland Film Festival, coming in October 2022!

Questions? Check out our Submission FAQs.